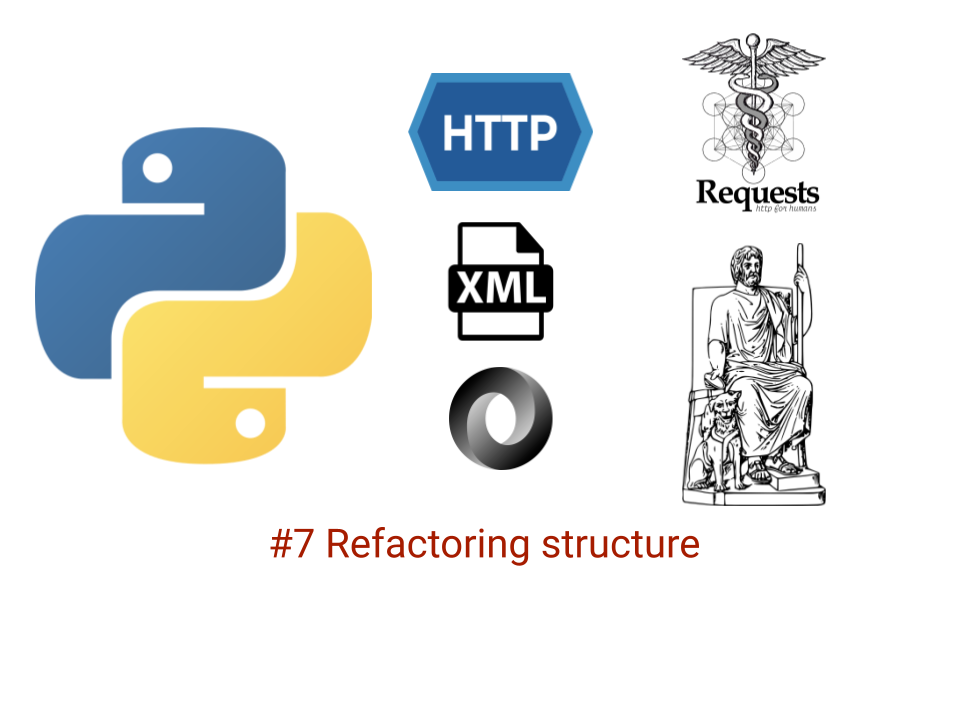 This is the seventh post in a series on how to build an API framework using python.

You can read previous parts below:

So far, we’ve been observing how to achieve a specific piece of functionality in our API framework using available packages in the python ecosystem.

However, when we talk about a framework, we have to do a bit more upfront thinking about how this would be used by team members and the overall structure in which it is organized becomes as important as well.

One way that I typically approach is to decide on an structure based on initial needs and then continuously refactor as the domain, context changes, typically after a few cycles the structure and the relationships between different modules, classes becomes clear and you have your framework structure.

Let’s see what some of these changes are:

Remove unnecessary comment and replace them with well named functions/classes

If you have been following along earlier commits/posts in this series, you would have seen that we had given inline comments using # above many lines of code.

While this might be okay for a demo framework like this, I still wanted to call out that this practice could be quite bad in a real project. Reason being, with every passing wave of refactoring you might extract certain functions or rename variables or even change behavior in some cases.

Quite often, it’s easy to forget updating the comment and then you have comments which don’t even match with underlying logic and that is just plain confusing for the person who reads your code. 🤷🏼‍♂️

I’ve thus removed these from this branch and from the final master branch as well.

Below is the updated tests file with this and some other changes:

Notice, we have replaced all the comments with better named functions that clarify intent.

In earlier posts, we were directly calling requests.get(), post() and other methods and working with response objects.

While requests (or, any other library) today does a good job for us, we might have to tweak its behavior for all our tests or might have to switch to a different library altogether.

To ensure minimal changes to test code in those scenarios, it’s always a good idea to wrap these third party library code into an abstraction that we maintain.

One common pattern is to abstract these domain operations into their own client class/module.

Notice, we have created wrapper methods for the HTTP operations that our current framework needs, namely post(), delete() and also we are wrapping the response object into a custom object that we control.

This is very powerful for the above mentioned reasons

We also make use of Pythons @dataclass annotation to create this data holder and use the private method __get_responses to take a response object from requests and then return our own implementation.

Another thing to observe is, we have not put any validations on response status code, body, headers in these client methods.

This is intentional since we want this to be the tests concern. The client just gives a simple class to make these HTTP requests and leaves all implementation details for different validations to the tests.

This approach ensures we can reuse the same method in the client to test for a success (2XX) or a failure case (4XX, 5XX) status code.

Abstract helper methods into their own class/module

I’ve also moved some helper methods related to searching a person in response and the JSON path implementation into its own module, this ensures that the test code is clean and there is less cognitive overload on the person looking at the code to grasp each and every detail.

For instance a descriptive method name like search_created_user_in is always going to be more understandable than [person for person in peoples if person['lname'] == last_name][0] which requires the code reader to grasp python list comprehension, array slicing and what not.

Abstract common assertions into their own module

Pytest framework has the flexibility to put fixture code into a conftest.py file which is auto discovered and allows us to separate setup teardown code from the actual tests.

In the end our entire test file is now well refactored and much more readable.

A Simple heuristic to follow: Make it work => beautiful => fast

Notice how we approached this whole exercise and did these refactoring in phases. That is one iterative way to build frameworks and has the benefit of ensuring only the required bits of code come into the framework.

Below is the general heuristic i follow which has been written about multiple times.

In summary, Most of the concerns were abstracted into a dedicated place which can be easily understood and modified in the future.

Is this the perfect structure though?

Heck no 🥴, what you decide on heavily maps to your specific domain models and context, however treat these as some guidelines along the way on how to approach structuring your framework.

A well defined structure would most often than not, stand the test of time while ensuring all the people contributing understand and are able to navigate it with ease and is a very important aspect that good software engineers care about.

Software development engineer in Test is a popular role/title in Testing space. In this post I share my thoughts on what this role means and some of the skil...