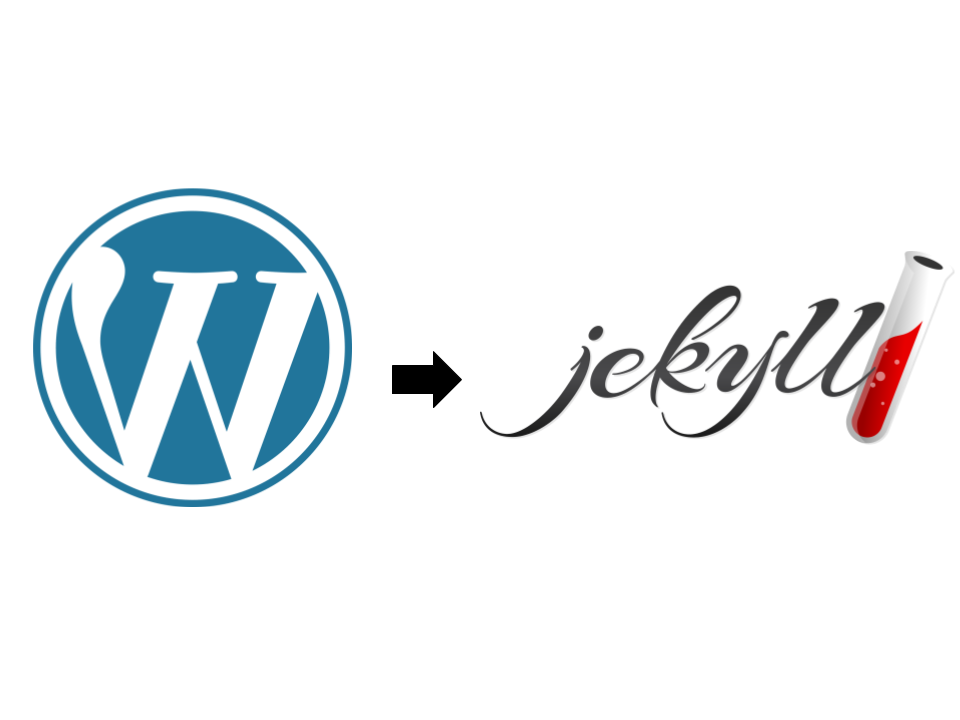 I’ve recently moved the blog away from Wordpress and have dived into the wonderful word of static site generators using Jekyll and Github pages. This post talks about how the overall process looked like and what were some of the additional customizations I added along with references. Let’s get started.

Why? You might ask, Well, Wordpress had been great for me initially. It enabled me to start blogging without any consideration of the technical setup needed and it was quite easy to have a fully featured blog within minutes

However over time, the overall experience felt a bit bloated and what i realized is that I do not really make use of all the capability that Wordpress as a platform offered.

Also, For any new functionality that I might need, I had to add Wordpress plugins (and that requires a business plan at the least)

It conflicted with my goals of having a minimal, fast technical blog/portfolio site that I have full control over and customize to whatever needs might arise and this ultimately motivated me to take the plunge and move away from Wordpress

Welcome to the world of static site generators (SSG)

I had been aware of static site generators before and had heard of Jekyll, Hugo, Sphinx among many others. Watched a few videos around this and ultimately found Jekyll to have the required functionality and customization for my needs

One of the motivating factors in favor of Jekyll was that it has a very tight integration with Github, plus the hosting of the site is very graciously taken care of by Github. I had to only buy the domain on Namecheap and do setup and the site was good to go. 🙌

The icing on the top was that my entire workflow involves writing posts in plain markdown and then using Git and Github for the publishing workflow. Can’t get more minimal than that. 😆

There were many good tutorials that other people had already put out for this process and that i referred while migrating, check them out

Below are the steps that I took and my experience around it.

Depending on which platform your current blog is hosted on, there are different importers that you could use to convert the dumps to a format that Jekyll can understand

My site was hosted on wordpress.com and so I had to download the content and then run Jekyll import tool

Once done with above, It gave me a sample layout with all the images and other posts in _posts directory

Jekyll docs are very well written and explain these in detail, Before starting ensure you have Ruby, RubyGems and other libs setup. Follow instructions from Jekyll Quickstart

Once done, Below are the steps to create a new Jekyll site

Note: You should have a repository with yourname.github.io in GitHub already, You can either create it first and then clone and then run above command or use git remote add origin <your_repo_url> > Read more here

You can serve the newly created site on localhost, which you can access on port 4000. localhost:4000:

In Jekyll, posts are maintained in _posts directory and are ordered in yyyy-mm-dd-<title> format, You can also write drafts in _drafts folder and Jekyll is smart enough to not serve these on your site until you are ready and move it under posts

Push to GitHub and you are live

You can go with the default domain (.github.io) or setup your own.

To setup your own domain, create a file CNAME in folder root and add your domain name

Add this domain in Custom domain and also select Enforce HTTPS if your domain supports SSL. Read more about how to do this on Github docs

You can very easily buy a domain of whatever provider you want. I use namecheap for my site and you need to setup A record in your Advanced DNS settings. Note the IP address of Github servers might have changed so figure out the latest ones and replace in your settings 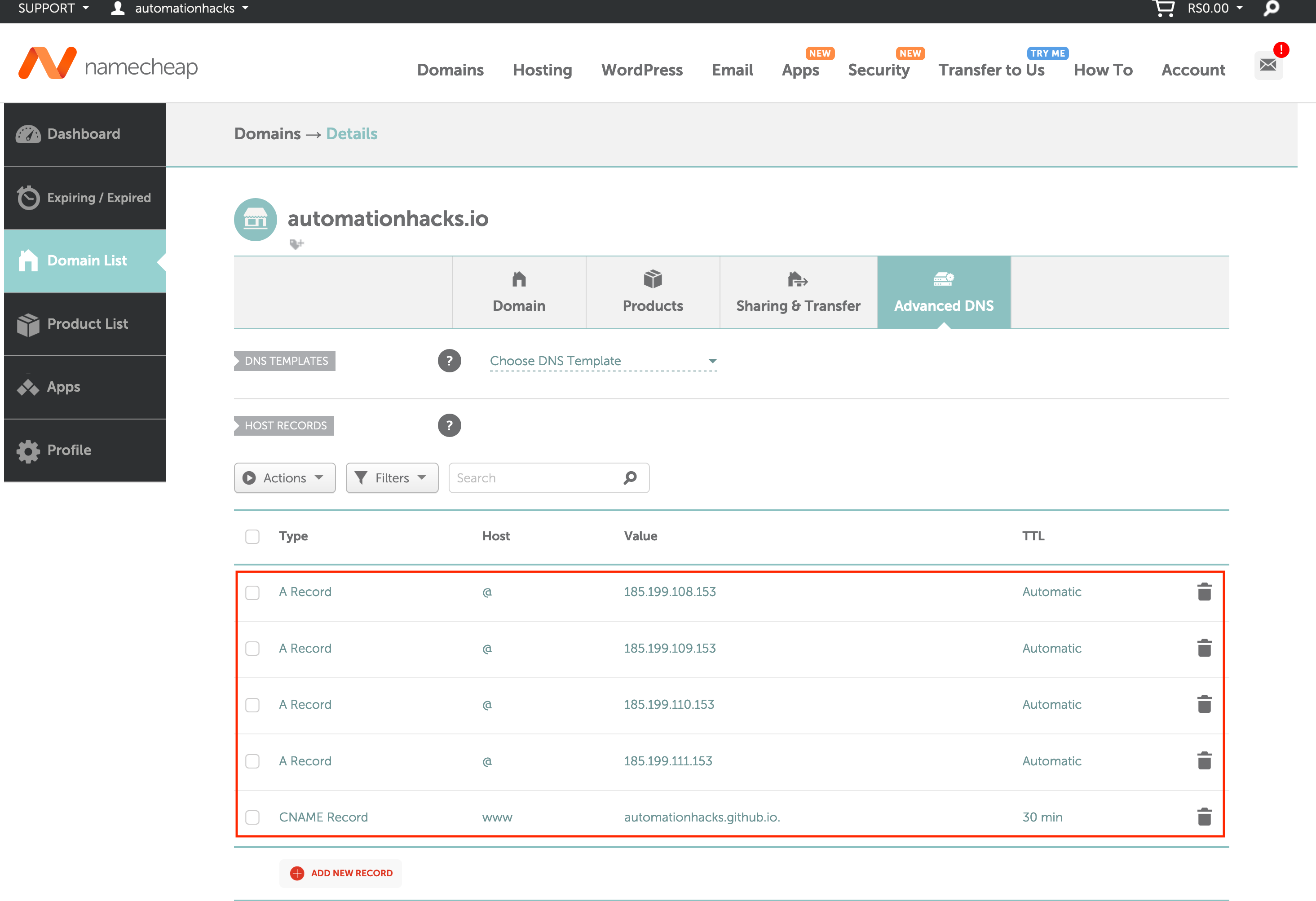 Once the setting has been done in your Github repository and the domain provider. Wait for some time for the setting to take effect. Usually a few hours but can take max of upto 24 hours

Jekyll uses Gems for most of the additional functionality that you might need and associated plugins, Below is the basic process for installing and adding any new Gem into the site

Add below lines in _config.yml under group :jekyll_plugins do, Below are the ones that I have initially added and few of which I would explain in further sections or future blog posts

You can then install all the gems mentioned in Gemfile using below:

Some manual fixes to be made

The export and import process leaves some cleanup activities to be done on the posts/pages, For a large enough site you might want to automate some of these

Get Github gists to render

Some steps for the same can be:

Note: There would be lot of HTML mixed with markdown in the blog and while you can certainly fix them into a markdown syntax, it would take a long time. I decided to let it be as long as the URLs/Images were fine

To setup comments on the blog, i chose disqus.com, The process is quite simple and you need to create an account on Disqus and then make couple of changes into your _config.yml

This would start showing the Disqus comment block if your page has comments: true in the front matter

If you want to ensure that comments are enabled on all the pages then add below defaults to your _config.yml, this is sweet :laughing: because you don’t need to repeat the same values in all the posts frontmatter.

Psst 🤫: You might want to refer to this blog for details

You might want to hook up Google analytics or equivalent to get some idea on your audience. Create an account on Google analytics and that should give you a unique id. Update that in your config.yml file and you are good to go with basic analytics.

Obviously there are more customizations that can be done, but that would probably be a future post

Psst: 🤫: Refer to this for more details

Voila, You have a fully customizable site up and running. I will be posting more about this in the future as I learn more about Jekyll.

If you found this post useful, Do share it with a friend or colleague. Until next time. Happy testing.

Here are some more resources that you can refer:

To learn more about Jekyll, Check out Mike Danes videos on YouTube