Recently at my workplace, we had to ship the rewrite of an API from Ruby on rails to Go. This was a critical API for the business and we wanted to see how it held up under simulated load. The functional API tests were already automated and working fine and this was the missing link for us to gain confidence in our changes before diverting traffic to it.

We needed something in place quickly without too much setup time, one consideration was to even keep the functional tests running in a loop though it was a no brainer that it would not be even remotely close to a live test.

I am typically a big fan of not reinventing the wheel and decided to explore tools and libraries already available for this problem space. There is no shortage of proprietary load testing tools available and quite some prominent OSS ones were: Apache Jmeter, Gatling, Vegeta, and many others.

All of them have their own unique selling points and limitations though trying out each to see which works best would have taken a lot of time. Plus there was even the larger language barrier of learning Go (Vegeta) or Scala (Gatling) in order to wire up something quickly.

Apache Jmeter is heralded as the most obvious choice while setting up load tests though I wanted something which could express these tests well enough in code and not be bothered with learning a tools UI to setup.

So which one did I decide to go with?

It’s no secret that I am an ardent fan of Python language and so while researching on this topic when I came across Locust, I was already well motivated to try it out. While visiting the locust website, I could see it being highly praised by amazing leaders in the python community and since language was not a barrier, I was confident that this was something I could easily work with.

Setting up a simple mocked API via mock server

For this post, we would work with a simple mocked API since testing a live API has its own set of rate-limiting constraints.

Let’s see if we can set up a simple mock server to return us an expected response which we could use demo how to create a perf test with locust.

Mock server library is quite customizable and offers a variety of usage patterns however we would go for starting a standalone mock server via command line and then set up a simple expectation of basic mock response.

You should see a message like this on the terminal:

Cool. So we have a local mock server running. To verify if it is indeed working you can run a simple cURL command and see a blank response

So, now, Lets set up a simple expectation on this mock server. We can do this in a variety of different ways. Either using JSON, or Rest API or clients (Java/JS)

Since code is easily the most simple way to set this up, Let’s go ahead with that.

Using any Java project setup with a maven or Gradle setup, we need to include below dependencies:

We can add below in the dependencies section of the build.gradle file.

Let’s create a simple MockServer.kt file with the code to set this up:

With this code, we are essentially registering an expectation with the mock server that if you get any request with /users in the request URL, then respond with a 200 status code and a dummy JSON response read from users.json file.

This sample response is taken from JSON placeholder site

Let’s run this file either via IntelliJ or via command line. You should see output like below on the same terminal where mock server is running which tells that our expectation has been registered successfully.

We can test that the mock server is setup properly by running below cURL:

Awesome! So with this we have a mock server setup and ready to be automated.

Swarming this API with locust:

Locust is a distributed load testing tool and uses light weight processes for concurrent user load. Plus the tests are coded in python which gives us a great deal of flexibility while authoring them. To top it all of, Locust gives a nice Web UI that can be used to control this test and see useful stats. Read more about its features here

Install the module via pip:

To define a locust test we need to do some basic steps:

And voila! Once this is setup we are ready to kick off our load test.

To run a locust test, we can run the below command. Here -f is used to provide the path where the test file resides and the host to be prepended in front of every request.

If you navigate to http://localhost:8089, You can see a nice Web UI like below:

Let’s say we want to simulate 1000 concurrent users with 500 users spawned per second.

You can see statistics around every endpoint, how many requests made, what was the median response and even RPS.

Locust is also smart enough to plot a graph with these stats and provide you an option to download this in a convenient CSV format. 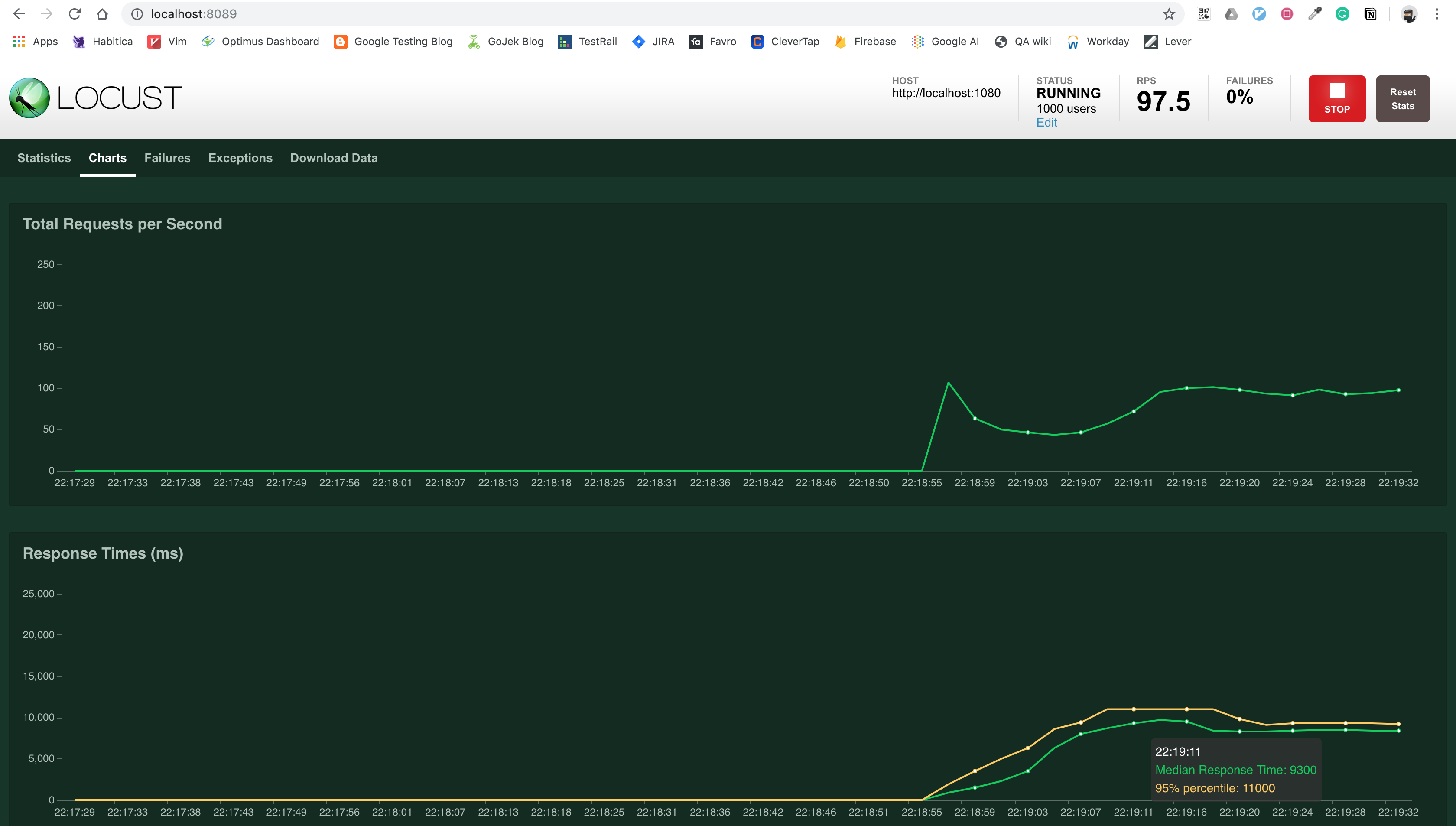 Now, Also in case you want to run this test without the web UI all you need to do is append below flags:

And also set up the test to run for desired duration:

So much of useful functionality available with so much ease. Locust was a breeze to work with and using this I was able to setup quick tests for the API under test and give devs the opportunity to monitor the simulated traffic via monitoring tools.

We did discover few issues around the responsiveness of the API, timeouts and overall our understanding of the limits of our API before production deploy was much better than if we had just relied on functional tests.

That’s it for this one. In case you found this useful, Do share with your friends or colleagues. Till next time! Cheers.